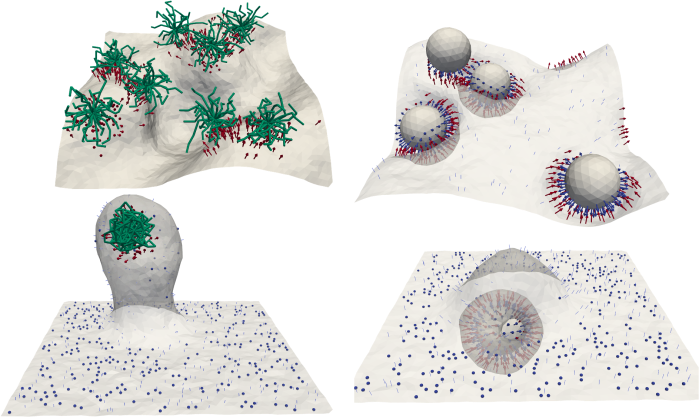 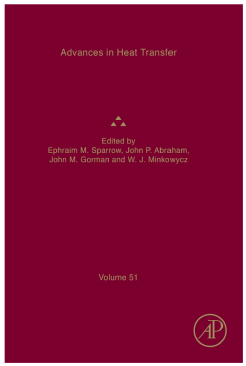 Abstract – Nanoparticles submerged in confined flow fields occur in several technological applications involving heat and mass transfer in nanoscale systems. Describing the transport with nanoparticles in confined flows poses additional challenges due to the coupling between the thermal effects and fluid forces. Here, we focus on the relevant literature related to Brownian motion, hydrodynamic interactions and transport associated with nanoparticles in confined flows. We review the literature on the several techniques that are based on the principles of non-equilibrium statistical mechanics and computational fluid dynamics in order to simultaneously preserve the fluctuation-dissipation relationship and the prevailing hydrodynamic correlations. Through a review of select examples, we discuss the treatments of the temporal dynamics from the colloidal scales to the molecular scales pertaining to nanoscale fluid dynamics and heat transfer. As evident from this review, there, indeed has been little progress made in regard to the accurate modeling of heat transport in nanofluids flowing in confined geometries such as tubes. Therefore the associated mechanisms with such processes remain unexplained. This review has revealed that the information available in open literature on the transport properties of nanofluids is often contradictory and confusing. It has been very difficult to draw definitive conclusions. The quality of work reported on this topic is non-uniform. A significant portion of this review pertains to the treatment of the fluid dynamic aspects of the nanoparticle transport problem. By simultaneously treating the energy transport in ways discussed in this review as related to momentum transport, the ultimate goal of understanding nanoscale heat transport in confined flows may be achieved.

Abstract – We report computational investigations of deformable polymeric nanoparticles (NPs) under colloidal suspension flow and adhesive environment. We employ a coarse-grained model for the polymeric NP and perform Brownian dynamics (BD) simulations with hydrodynamic interactions and in the presence of wall-confinement, particulate margination, and wall-adhesion for obtaining NP microstructure, shape, and anisotropic and inhomogeneous transport properties for different NP stiffness. These microscopic properties are utilized in solving the Fokker–Planck equation to obtain the spatial distribution of NP subject to shear, margination due to colloidal microparticles, and confinement due to a vessel wall. Comparing our computational results for the amount of NP margination to the near-wall adhesion regime with those of our binding experiments in cell culture under shear, we found quantitative agreement on shear-enhanced binding, the effect of particulate volume fraction, and the effect of NP stiffness. For the experimentally realized polymeric NP, our model predicts that the shear and volume fraction mediated enhancement in targeting has a hydrodynamic transport origin and is not due to a multivalent binding effect. However, for ultrasoft polymeric NPs, our model predicts a substantial increase in targeting due to multivalent binding. Our results are also in general agreement with experiments of tissue targeting measurements in vivo in mice, however, one needs to exercise caution in extending the modeling treatment to in vivo conditions owing to model approximations. The reported combined computational approach and results are expected to enable fine-tuning of design and optimization of flexible NP in targeted drug delivery applications. 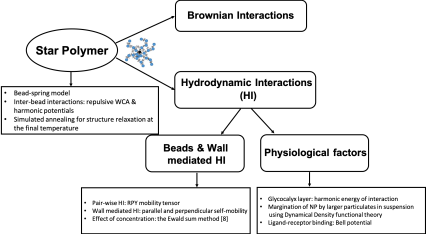 Abstract – Describing the hydrodynamics of nanoparticles in fluid media poses interesting challenges due to the coupling between the Brownian and hydrodynamic forces at the nanoscale. We focus on multiscale formulations of Brownian motion and hydrodynamic interactions (HI) of a single flexible polymeric nanoparticle in confining flows using the Brownian Dynamics method. The nanoparticle is modeled as a self-avoiding freely jointed polymer chain that is subject to Brownian forces, hydrodynamics forces, and repulsive interactions with the confining wall. To accommodate the effect of the wall, the hydrodynamic lift due to the wall is included in the mobility of a bead of the polymer chain which depends on its proximity to the wall. Using the example of a flexible polymeric nanoparticle, we illustrate temporal dynamics pertaining to the colloidal scale as well as the nanoscale. 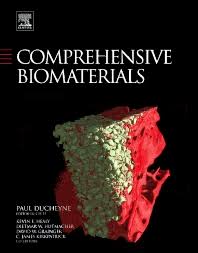 Abstract – In this article, we discuss the implementation of several computational techniques that are commonly employed to simulate interactions between biomaterials and cellular systems. These methods include molecular dynamics, biopolymer, and homology modeling, which focus on the atomic structure of biomaterials, electronic structure methods, and free-energy simulations. Challenges involved in applying these techniques and connections to cellular experiments are also addressed. These computational methods are important tools in delineating the molecular mechanisms involved in the interactions between biomaterials and tissue, which govern biocompatibility. They have also been applied in the rational design of biomaterials, as molecular-based models predict likely recognition sequences and the corresponding conformations at the interface between material surface and extracellular matrix and cell membrane. Focusing on these molecular mechanisms will lead to new insights into the bioactivity of existing biomaterials and to the development of improved biomaterials for use in bone tissue repair therapies and targeted drug delivery. The chapter concludes with a discussion of recent applications of computational methods to the rational design of biomaterials, including the creation of surfaces with tailored functionality, computational modeling of the attachment function of fibronectin, and model-based design of tunable nanocarriers for drug delivery.

Abstract – The coalescence-induced jumping of liquid droplets on superhydrophobic structured substrates is investigated numerically using a three-dimensional multiphase lattice Boltzmann method. The numerical experiments on evolution of droplets during jumping process show higher jumping velocity and height from superhydrophobic substrates structured with a periodic array of square pillars, than flat superhydrophobic substrates with an equilibrium contact angle of 180º. The results further reveal a strong effect of pillars on the vertical jumping velocity and the final quasi-equilibrium height of the merged droplet as a function of air and liquid viscosity, as well as air inertia. As for substrate wettability, it is found that, compared to the flat superhydrophobic substrate, the critical contact angle where the merged droplet jumps away from substrate is reduced for pillared substrate and is about 120º. It is also observed that the droplet initial placement on a substrate with a square array of pillars has an important effect on the spontaneous jumping of the coalesced droplet, and a Wenzel–Cassie wetting transition upon coalescence is observed for droplets that are initially immersed within the pillars.

Abstract – The problem of coalescence-induced self-propelled jumping of droplet is studied using three-dimensional numerical simulation. The focus is on the effect of inertia and in particular the effect of air density on the behavior of the merged droplet during jumping. A lattice Boltzmann method is used for two identical, static micro-droplets coalescing on a homogeneous substrate with contact angle ranging from 0º to 180º. The results reveal that the effect of air density is significant on detachment of the merged droplet from the substrate at the later stage of the jumping process; the larger the air density, the larger the jumping height of the droplet. Analysis of streamlines and vorticity contours is performed for density ratios ranging from 60 to 800. These show a generation of vortical structures inside and around the droplet. The intensity of these structures gets weaker after droplet departure as the air inertia is decreased. The results are also presented in terms of phase diagrams of the merged droplet jumping for different Ohnesorge numbers (Oh) and surface wettabilities for both small and large density ratios. The critical value of contact angle where the merged droplet jumps away from the substrate is independent of density ratio and has a value around 150∘. However, the critical value of Oh depends on both density ratio and wettability of the surface for contact angles greater than 150º. In this range of contact angle, the diagrams show two distinct dynamical regimes for different density ratios, namely, inertial and viscous regimes.

Abstract – The impact of microscopic liquid drops on solids with a variety of surface characteristics is studied using numerical simulations. The focus is on relatively low impact velocities leading to bouncing or spreading drops, and the effects of wettability. Molecular dynamics and lattice Boltzmann simulation methods are used for nanometer-sized and continuum drops, respectively, and the results of the two methods are compared in terms of scaled variables. We consider surfaces which are flat, curved or pillared, with either homogeneous interactions or cross-shaped patterns of wettability. In most situations we observe similar drop behavior at both length scales; the two methods agree best at low impact velocities on wettable surfaces while discrepancies are most pronounced for strongly hydrophobic surfaces and for higher velocities.

Abstract – Lattice Boltzmann simulations based on the Cahn-Hilliard diffuse interface approach are performed for droplet dynamics in viscous fluid under shear flow, where the degree of confinement between two parallel walls can play an important role. The effects of viscosity ratio, capillary number, Reynolds number, and confinement ratio on droplet deformation and break-up in moderately and highly confined shear flows are investigated.

“The most beautiful thing we can experience is the mysterious. It is the source of all true art and science.” Albert Einstein